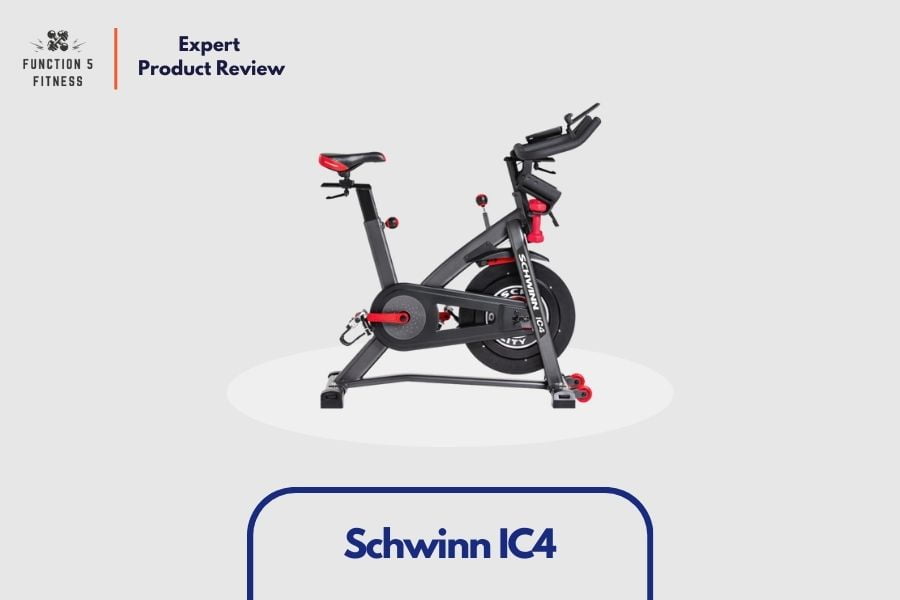 As an affordable alternative to the Peloton and other live and/or streaming training bikes on the market, the new Schwinn IC4 makes a convincing case. Priced at a very modest $899, it claims that it is affordable to offer an immersive interactive indoor cycling experience.

Nevertheless, does the budget-friendly price of the IC4 suggest that customers must compromise on efficiency or experience?

With common cycling applications, we put the Schwinn IC4 to the test to see if it could deliver anything we needed in a home cycling workout. We wanted a robust indoor cycle that could link to other streaming services. The Schwinn’s IC4 Bike is not without its shortcomings, but it is still an option that is worth a second look. What could be Better

The Schwinn IC4 is a lightweight, streamlined bike with a footprint measuring just 21 by 49 inches. The bike can quickly be shifted to a corner when it’s not in use, making it incredibly versatile. We figured this attribute would appeal to those who would like to set up their indoor bikes in limited or mixed-use spaces.

Just like more costly versions, the bike offers 100 resistance levels and cadence tracking. The IC4 also comes with a heart rate armband with Bluetooth that synchronizes with the bike and other applications.

We were impressed by the Schwinn IC4’s overall design. With a high emphasis on rider comfort and flexibility, it is well-constructed. No instances of the bike wobbling or moving, even during times of vigorous cycling, were encountered. One stand-out aspect of the design of the Schwinn IC4 is its quiet service. It’s almost silent and it’s riding on one of the quietest workout bikes we’ve ever tried.

Compared with other exercise bikes we have tried, we found that resistance was stronger at lower levels on the Schwinn IC4. It did not take long, however, to get used to the difference, and once we reached 50, the resistance was almost the same.

The media tray is strong, without sliding, and it secures phones and tablets.

For quick access, dual water bottle holders are placed directly below the handlebars and are tilted towards the user.

It didn’t take too long for us to get acclimatized to the seat, but for riders seeking a more comfortable experience, we suggest a gel cushion (a cheap addition).

The Schwinn IC4 pedals have been equipped for both cages and SPD clips. This implies the option for riders to wear either standard sneakers or cycling shoes, another option that makes this model more flexible than other similar indoor bikes.

The heart rate monitor pairs effectively with the Schwinn IC4 as well as with other apps and fitness trackers.

Get IC4 with Free Shipping!

What fitness applications does the Schwinn IC4 work with?

Does the budget-friendly price of the IC suggest that customers must compromise on efficiency or experience? Let’s find out!

Peloton app with the Schwinn IC4

It was convenient to download the Peloton app and pair it with the Schwinn IC4 and heart rate monitor. The app offered access to both live and recorded classes of the Peloton. We were able to enjoy an immersive experience in classes that included watching fellow riders.

Although we were not able to see the leaderboard in the Peloton app, the app allowed us to track cadence and heart rate effort. With the Kinetic app, we found a solution involving combining the Kinetic app with the heart rate monitor and Schwinn IC4, followed by opening the Peloton app. During Peloton lessons, this choice will probably appeal to those interested in monitoring cycling data or endurance zones.

Zwift app with the Schwinn IC4

Zwift app integrates well with the Schwinn IC4, and cadence and heart rate can be viewed easily. The app has a game-like interface that as opposed to instructor-led courses, is geared towards cycling training and free rides. In some operations, we were able to travel in groups. Overall, with the Schwinn IC4, we thought using the Zwift app would serve performance-oriented and competitive cyclists better.

On the Les Mills app, we thoroughly enjoyed classes, especially the RPM, Spring, and Trip courses. The app, however, doesn’t bind the way the Peloton and Zwift apps do with the Schwinn IC4 Bike. Even so, we thought it was easy to follow the call-outs of the instructors and change the resistance manually, which provided the app with an exhilarating cycle studio experience. These two indoor bikes are inexpensive alternatives to the pricey machines for heavy-duty fitness cycling you see in gyms. Speaking of features, both Schwinn IC4 and Bowflex C6 have Bluetooth digital communication and armband tracking of heart rate. Both deliver an ultra-smooth riding experience. You see flexible race-style saddles and dipped large-sized handlebars when it comes to frame, comfort, and flexibility.

Both bikes have a built-in backlit LCD to monitor cadence and track the progress. Schwinn IC4 offers 100 levels of resistance, as Peloton does, though the levels aren’t equivalent. The main difference between Bowflex C6 and IC4 is the price. Apart from this, another prominent difference is the seat as in terms of comfort & quality, we found Bowflex C6 slightly better than Schwinn IC4.

The Peloton exercise bike is the smarter type, at face value. You can also trust the bike’s durability design to last you for many years. On the other hand, the Schwinn IC4 model lives up to many of the Peloton-related specifications. When it comes to design, the Peloton does stand out. The customizable handlebars and saddle ensure a very smooth ride on top of the integrated app. It also looks stylish and invites users to get on for a spin. There’s literally no way around this exercise bike’s overall consistency. But is such a steep price worth it really?

The Peloton looks more than a little costly when compared with the IC4. Ultimately, just without the bells and whistles, the Schwinn IC4 can easily be compared to the Peloton. It may not look as sleek or new, but it remains a powerful competitor. So, you won’t be disappointed with the Peloton model if you feel like you can’t put a price on fitness. But you can’t go wrong with the Schwinn IC4 if you’re looking for the same standard exercise bike at a much lower price point. It can serve you for years just as well, but without breaking the bank. Although the IC4 is slightly more cost-effective than the Echelon EX-1, both are very reasonably priced options, especially when compared to other indoor cycles offering live and on-demand classes. Multiple indoor cycle models are offered by both Echelon and Schwinn, which differ in pricing and features.

Although both bikes have similar features, only Echelon features a proprietary app with a precision resistance motor. Users who want additional features, such as an integrated touchscreen, may want to consider other versions, such as the Echelon EX-5s.

It is a good idea to compare different models before buying either an Echelon or Schwinn bike, so you can find the one that is better suited to your needs. Both of these two cycling bikes are well-built fitness machines. IC4 unit offers more features. To endure the rigors of hours of use, both bikes have quality designed frames. On both bikes, Heart Telemetry is provided.

The biggest difference between the versions is that the Schwinn IC4 has more attributes, including access to your tablet to screen fitness apps. The IC4 uses magnetic resistance that is quiet and maintenance-free. Friction pads are used for the IC3, which must be replaced when they wear out.

We feel that the Schwinn IC4 with magnetic resistance and access to common fitness APPs is a great value. The Schwinn IC3 is a conventional, lower-cost cycling bike than the IC4. Another thing to remember is that the IC4 has a warranty that is much longer than the IC3 model. Both bikes are perfect for cycling, but along with magnetic resistance, the IC4 has earned higher ratings and more options.

Warranty terms for products purchased in the USA or Canada are:

It was pretty easy to set up the Schwinn IC4 and it took us less than 30 minutes. All necessary parts and instruments were included in the included assembly package. First, we connected the pedals to the frame, followed by the handlebar post and seat post. The water bottle holders and weights rack were next. Once the console and media tray were connected, all we had to do was plug the AC adapter of the bike into it.

Although the Schwinn IC4 has a full-color backlit LCD panel, it doesn’t come with a monitor for streaming classes or other media. Instead, users can set up practically any tablet or smartphone, which we appreciate because it provides more flexibility.

Thanks to the magnetic resistance with 100 levels, the ride is quiet and smooth via a 40lbs flywheel. It comes with a beautiful backlit display screen.

If you want the Peloton experience without the elevated sticker price, the Schwinn IC4 is a great exercise bike choice. Its 40-pound drive, wireless telemetry, and Bluetooth networking for immersive training are impressive for a spin bike below $900.

Bottom line; the bike is simply tough as nails with good warranty service. Combine the price with that, and it’s a no-brainer. So happy we pulled the trigger on this rather than buying the health-club-quality model.

The article has been researched & compiled by the Editorial F5F Team, a group of experienced fitness & health writers.